I have lots of fun creating faux cupcakes. They’re a simple and cute project that you can make as a gift for someone, or just use them as a decoration in your kitchen. I wanted to try something new, so I made a DIY faux birthday cake. It not only sounded like a really fun project, but I also wanted to have it when I’m live on my Facebook page. If it is someone’s birthday I hold it up, and we all sing Happy Birthday to them!

(I’m an Amazon affiliate, and earn a small % from each item purchased, which doesn’t effect the item’s price.)

For this project, I used an all purpose joint compound I got from Home Depot. I prefer to use DAP, but they didn’t have it. The joint compound was a thinner consistency than DAP, and it is a grey color. I didn’t want it grey, so I added some white Apple Barrel paint and mixed it together with a popsicle stick. 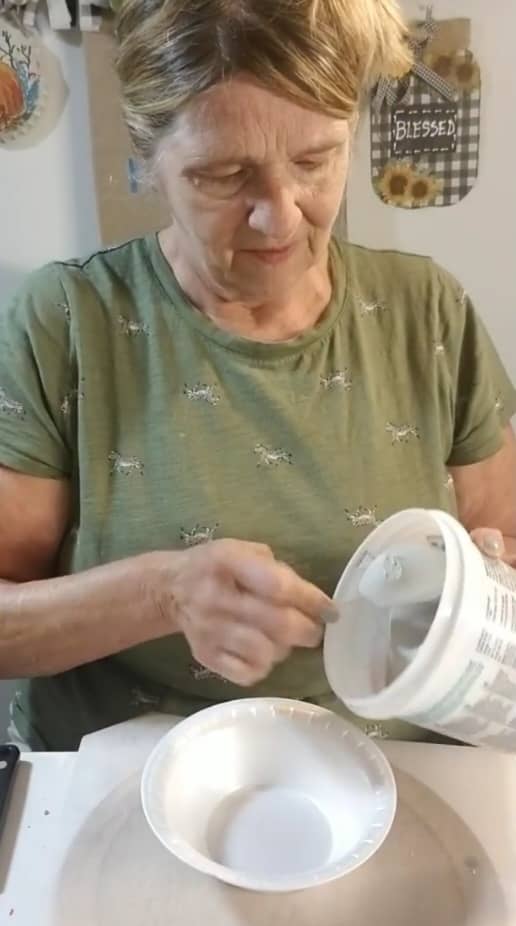 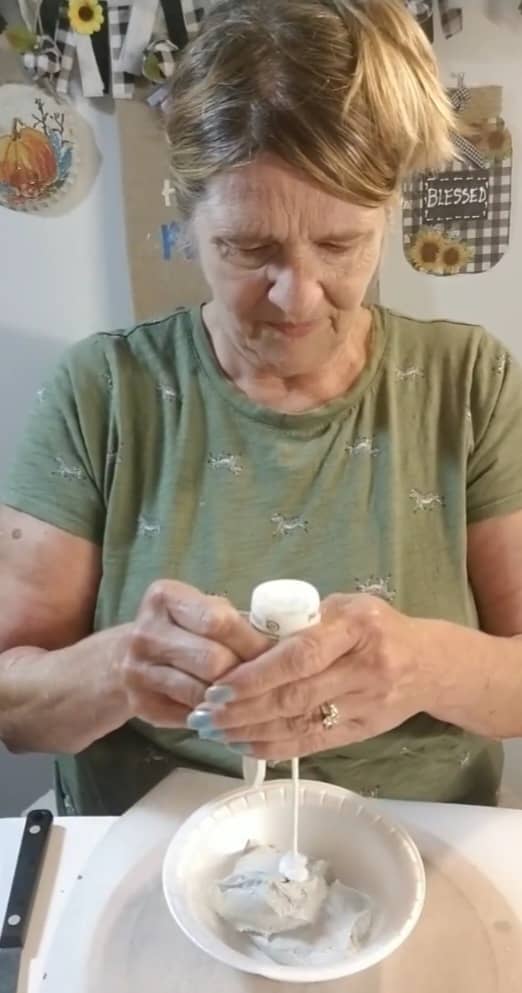 I used a Lazy Susan so that I could easily decorate the faux cake. I put a piece of wax paper over the Lazy Susan, and then put a smear of compound in the middle using the icing spatula. The reason I did that was to keep the rounds in place while I was working with them. I then put one of the rounds on and covered the top of it with the mixture. I repeated this step 3 more times. 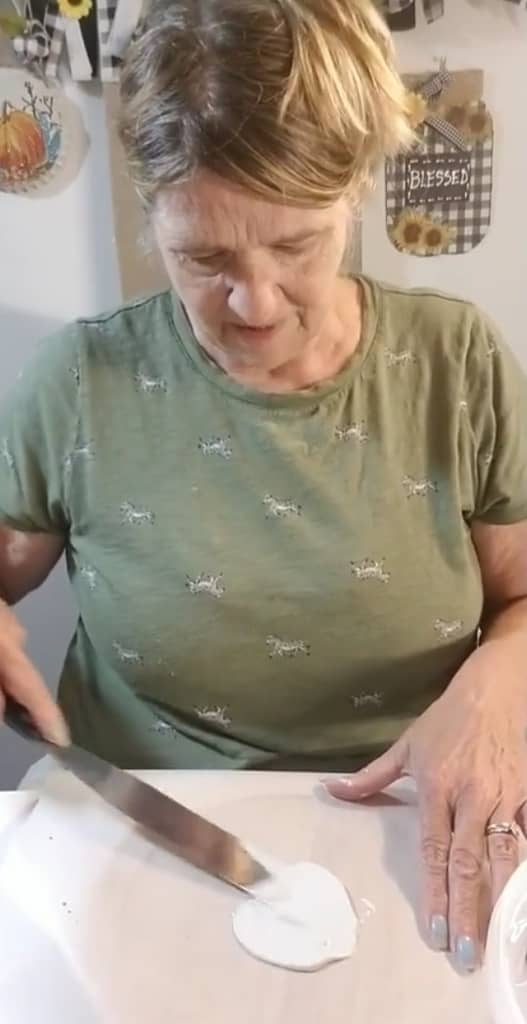 When the final round was on top, I spread the mixture around the sides of the stack, just as you would when icing a cake. I had to make another small batch of the compound/paint mixture to finish covering it all.

Now the rounds were covered and looked like a cake with white icing. I grabbed some icing tips, a coupler, and icing bags. Then I cut a small part of the tip off the icing bag, and put the icing tip and coupler on.

I put more of the compound into a bowl, added Diva Pink Apple Barrel paint with it, and mixed well. I thought the mixture was too thin, so I mixed in a small amount of flour to thicken it up a tiny bit. Now I had the thicker icing consistency I wanted!

I folded the sides down on the icing bag, so I could add the pink mixture into it and not make a mess. I also pushed the mixture down using a popsicle stick, in order to get rid of any air pockets. There is usually a fill line on icing bags. I filled to that line and twisted the bag closed.

Next I squeezed the mixture through the icing tip and made a design around the bottom and top of the faux cake. I used the Lazy Susan to rotate the cake while I was decorating it.

Let’s have some fun!

Now comes the really fun part! I decorated the top of the cake with a little plastic decoration that said “Happy Birthday”, and then added birthday candles. I used more of the pink mix to put dots around the side of the cake, then took my finger and dipped it in some flour and pressed the dots to flatten them. The flour kept the compound from sticking to my finger. That is a pretty handy trick!

The faux birthday cake looked great, but of course I wasn’t finished yet! I added some star confetti and pearls around the top, also THE perfect final touch: GLITTER!

I love how the birthday cake turned out. I made it from the heart, just for you guys! I use it during Facebook live videos when it’s someones special day. We all have fun singing Happy Birthday to them, and the cake adds such a special touch. I hope that I’ve inspired you, and that you have a wonderful day!

This site uses Akismet to reduce spam. Learn how your comment data is processed.

Annie is an awesome lady. She inspires me in so many ways too many to share. She makes me feel...

Annie is an awesome lady. She inspires me in so many ways too many to share. She makes me feel like I could sit right down in her kitchen and enjoy a cup of coffee with her. She is truly a blessing to all.
https://passionatepaintedlady.com/testimonials/rhoda-wieneke/
Watching Annie has given me the confidence to try crafting myself. I watch all the time and really enjoy it...

Watching Annie has given me the confidence to try crafting myself. I watch all the time and really enjoy it all from Sussex England.
https://passionatepaintedlady.com/testimonials/susan-graham/
Annie is a great positive influence by being herself and creating beautiful crafts for all of us to enjoy. I...

Annie is a great positive influence by being herself and creating beautiful crafts for all of us to enjoy. I love how she keeps it real!
https://passionatepaintedlady.com/testimonials/bryan-hecksher/
Annie's positive passion, kind heart & creativity inspire me. She also has a great sense of humor & always gives...

Annie's positive passion, kind heart & creativity inspire me. She also has a great sense of humor & always gives me good smiles and laughs. 😊
https://passionatepaintedlady.com/testimonials/sonja-hansen/
Annie is a down to earth crafter, she inspires me with every craft she does, you get the real deal...

Annie is a down to earth crafter, she inspires me with every craft she does, you get the real deal with her.
https://passionatepaintedlady.com/testimonials/carol-rice/
I've only been watching a couple of months but I always look forward to her crafts and going shopping with...

I've only been watching a couple of months but I always look forward to her crafts and going shopping with her. She lets you know when something isn't going as planned but always improvises. I have enjoyed a renewal in my crafting and she is always so helpful. Thank you Annie!
https://passionatepaintedlady.com/testimonials/lorraine-roth/
0
0
Passionate Painted Lady

Follow me on social media to stay up to date on all of my projects and see what I create next!